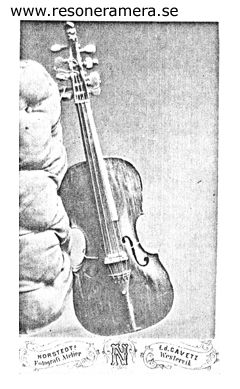 Published with permit from the Music Library of Sweden

This fiddle is mentioned in Carl-Erik SÃ¶dlings The history of swedish folkmusic where this picture also appears. SÃ¶dling writes (free translation):

One feature which is continously present at all fiddles which has been used by folk musicians: the sympathetic strings made of metal, that we've found througout the evolution of the instrument. I have a vague memory of such fiddles from my childhood. This is why I in 1877 wrote: "I have to leave the proof of these sympathetic strings to the future, even at modern folk fiddles, since even though I'm fully convinced of their presence and despite eager investigations I lack proof of them." However, this year (1881) I had the luck to find such a fiddle in the parish of Slaka close to LinkÃ¶ping, Ã–stergÃ¶tland. The picture can be seen in this book...

SÃ¶dling states that the understringed fiddles have been used by folk musicians and not by professional musicians who were hired by the higher classes. Unfortunately SÃ¶dling does not mention in which context this double-decker is found and whether he bought it or just took a picture of it. An interesting question is if it is still preserved. It has survived the period where many old fiddles where modernized but almost 130 years has passed since SÃ¶dling wrote this.